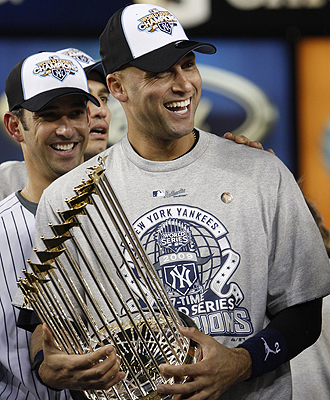 Could the Yankees get Jeter a ring for his other hand?

The 2013 New York Yankees season was rife with poor performance, injuries, moves made in desperation, steroid allegations, and a roster of maybes, has-beens, and never-weres.  Owner Hal Steinbrenner wanted general manager Brian Cashman to get payroll under control so that the team would fit under the 2014 luxury tax threshold of $189MM.  With injuries and payroll cuts, sub-par players like catcher Chris Stewart and journeyman infielders like Reid Brignac and Luis Cruz littered the 25-man roster last season.

Manager Joe Girardi did his best to push all the right buttons, but many days he simply ran out of buttons to push. The team managed to rack up 85 wins and finished in third place the AL East, but their record fell well short of a playoff appearance. It was just the second time since 1995 that the Yankees missed the post-season.

With Derek Jeter’s announcement that this will be his final season, the moves made by the Yankees this off-season could give him one final chance to add to his championship ring collection (He has five).  More importantly, Jeter needs to remain healthy after ankle and quad injuries limited him to 17 games in 2013.

The Yankees upgraded at catcher when they signed veteran Brian McCann to a five-year deal worth $85MM. The former Atlanta Brave hit 20 or more home runs during the last six seasons and should enjoy swinging at the short porch in right field this year.

Outfielder Jacoby Ellsbury, a member of the Boston Red Sox 2013 World Series championship, was persuaded to put on the pinstripes with a seven- year deal in excess of $152MM. (The deal could earn Ellsbury close to $169 if the Yankees exercise an 8th-year option.) There’s no question that the Yankees overpaid for a player who has missed more games than he has played in two of the last four seasons and suffered a calf injury during the current Spring Training season. But, if healthy, he can steal 50 bases and hit 10-15 home runs.

Carlos Beltran, a member of the New York Mets for six-plus seasons, returned to the Big Apple with a three-year deal worth $15MM per season.   The new right fielder’s post-season reputation made him a priority target for the Yankees this off-season.

The Yankees’ entire season could very well hinge on the biggest deal they made this winter. With competition from several teams, including Boston, the Yankees landed Nippon Baseball League pitching star Masahiro Tanaka, with a seven-year deal worth $155MM. The contract includes a full no-trade clause and an option to get out of the contract after the fourth year.  The right-handed pitcher was 24-0 last season playing for the Rakuten Golden Eagles and has looked confident in Spring Training.

The Yankees have two huge holes to fill in the infield. The team’s best hitter, second baseman Robinson Cano, departed for Seattle and a 10-year free agency deal. Third baseman Alex Rodriguez received a 162-game suspension from MLB for steroid use.

Without tried and true in-house replacements, the Yankees signed oft-injured, long-time Baltimore Orioles second baseman Brian Roberts and utility infielder Kelly Johnson, who played for three different teams in the last four seasons. Johnson will get the starting nod at the hot corner,  while the 36-year old Roberts hopes to play enough to contribute. The Yankees also signed one-time second base prospect Scott Sizemore to compete for an infield spot.

The starting rotation is set in the first four positions. Veteran lefty CC Sabathia will be followed by Hiroki Kuroda, Tanaka, and Ivan Nova. The final spot in the rotation was went to Michael Pineda after he out-performed David Phelps. Having Phelps in the pen will also be an asset to the Yankees.

David Robertson takes over for his long-time mentor, Mariano Rivera, at the closer position. He’s not guaranteed to be a lock there for the full season. He’ll be helped out in the late innings by Shawn Kelley, free agent lefty Matt Thornton, and possibly Dellin Betances.

Vidal Nuno adds another lefty to the pen, while Warren and Phelps will work as  long men.

The Yankees will deal outfielder Ichiro Suzuki, whose bat has slowed considerably, to open a spot for a youngster like Zoilo Almonte.

The Yankees re-signed utility man Brendan Ryan to back up Jeter at shortstop, but a back injury will land him on the DL to start the season. Decent-hitting, poor-fielding Eduardo Nunez has been sent to the minors in favor of minor leaguers Dean Anna and Yangervis Solarte, neither of which has a Major League at-bat.

Barring a trade, Francisco Cervelli, who is out of minor league options, will start the season as McCann’s backup. Soriano should be the primary DH and will get some outfield time. He’s also been taking grounders at first base as another way to keep his bat in the lineup.

The Yankees added some depth on Friday (3/28) when they brought back Al Aceves with a minor league contract, who was with the team from 2008-2010. Though he split time as a starter and reliever his first go-round, Aceves will be a starter for Triple-A Scranton.

Health is the key to the Yankees season, especially that of Ellsbury, Sabathia and Teixeira. The Yankees will hit the 90+ win mark if the offense produces,  Sabathia can bounce back from last year’s ineffectiveness and lost MPH on his fastball, Tanaka is the real deal, and youngsters Nova and Pineda reach their potential. 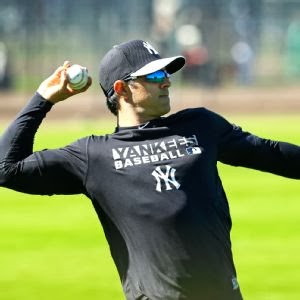 Originally written for My Pinstripes

I wouldn’t be surprised if Brian Cashman held a lucky rabbit’s foot, wore a four leaf clover around his neck, and said a novena or Hail Mary or two when Brian Roberts put ink to paper and signed his contract with the New York Yankees.

With Kelly Johnson also in camp, manager Joe Girardi announced that Roberts would be his starting second baseman when the team heads north (actually west to play the Houston Astros) to start the regular season. Roberts isn’t expected to replace the production that the Yankees will miss from Robinson Cano, but they hope Roberts and others can collectively make up some of that ground.

A once quick-as-a-rabbit youngster, Roberts joins a team of older, injured players. Well, most of them were injured last year anyway. For Roberts it’s been a myriad of injuries over the last several years.

Roberts suffered an abdominal strain in 2010 that kept him out  of the lineup from April to July and limited him to 59 games. (He also suffered from a herniated disc in his back during Spring Training in 2010.)

In May of 2011, Roberts hit the back of his head sliding into first base and suffered a serious concussion. He missed the rest of the 2011 season and didn’t return to the Majors until June, 2012.  But he wasn’t active for long.

Roberts hurt his groin in early July and was placed back on the DL. At the end of the month he opted for season ending hip surgery. During the off-season he also had surgery to repair a sports hernia. He played in 17 games, the lowest number of his career and the same number his new double play partner, Derek Jeter, played in his own injury plagued 2013 season.

In April, 2013 Roberts made another trip to the DL after he ruptured a tendon in a portion of hamstring behind his right knee and underwent surgery. It kept him out of an Orioles uniform until June 30. His 77 games played was the most action he saw over a four year stretch of injuries and surgeries, but his production was far below his norm. (.249/.312/.392 slash line)

In attempt to keep him healthy, Girardi may very well put the reins on Roberts when it comes to stolen base attempts and it will be interesting to see where he bats in the lineup with a pair of lead off men – Jacoby Ellsbury and Brett Gardner – already in the lineup.

The Yankees and Roberts don’t care where he bats as long as he can stay healthy and productive.

Drew Sarver is the publisher, managing editor, and a contributor for Designated For Assignment. He can be followed on twitter at @mypinstripes or contacted by email at dsarver@d4assignment.com.