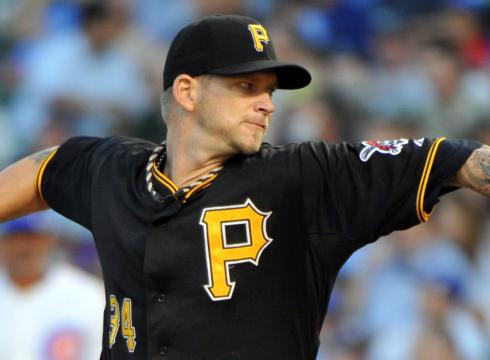 Sometimes the grass is greener on the other side of Pennsylvania. Free agent right-hander A.J. Burnett pitched for the Pittsburgh Pirates in 2012 and 2013 before he signed as a free agent with the Philadelphia Phillies prior to last season. After he turned down a $12.75MM option to return to Philly for the 2015 season, Burnett agreed today to a one year, $8.5MM that will have him donning the black and gold of the Pirates next season.

Burnett, who will turn 38 in January, made $15MM in a season in which he led the National League in losses with 18. The Phillies struggled as a team in 2014 and with the future not looking bright for the 2015 campagain, it was no shock that Burnett walked away from his option to play for a better team. Burnett had two of his best seasons as a member of the Pirates, who have made the playoffs the last two seasons as a wild card entry.

Burnett finished with 16 wins and posted a 3.51 ERA when the Pirates finished four games below .500 in 2012. The lanky righty, who has World Series rings from the 2003 Marlins (injuries limited him to 23 games) and 2009 Yankees, pitched in bad luck the following season, but the team ended a 20-year postseason drought. (The team won the wild card game before they lost to St. Louis in the division series.) The lanky righty finished 10-11 despite a 3.30 ERA and a league best 9.8 K’s per nine innings.

The first rule of fight club is, don’t give the Penguins a Power Play

Mark Letestu had given the Blue Jackets a 2-1 lead after one period with a power play tally of his own. But Blake Comeau took an interference penalty with 16 seconds left the opening period. The Pens’ carry-over PP didn’t start well in the second period thanks to Derek MacKenzie’s breakaway short-handed goal.

Columbus was seemingly in control of the game, and then they weren’t. Still on the PP, Matt Niskanen shaved the lead in half with a blast from the right point that was deflected past Sergei Bobrovsky by Beau Bennett. Just 35 seconds, Jack Johnson went off for interference and the Pens were right back on the ice with 5 on 4 advantage.

Sidney Crosby sent a pass above the right circle to Evgeni Malkin at the right point. Malkin quickly found Niskanen in the left circle and the Pens’ defenseman whipped a wrist shot into the net to tie the game at three apiece.

Meanwhile, Marc-Andre Fleury shut down the Blue Jackets the rest of the way and Brandon Sutter notched the game winner in the third period. A turnover at the Pittsburgh blue line created a two-on-one opportunity with Sutter skating down the right side. With the passing lane to Ray Whitney blocked, Sutter kept the puck and fired it through Bobrosvsky at 8:08, for what proved to be the game-winner.

Sidney Crosby was held to one assist, but the Pens have so many weapons, losing Game 1 doesn’t bode well for Columbus.

The Blue Jackets will also need to improve on face-offs; the Pens won 56% ot those taken. 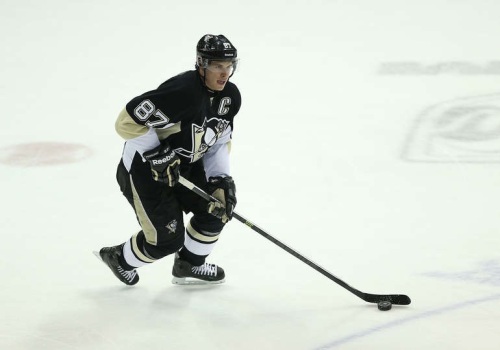 The Pittsburgh Penguins will showcase their offensive talent as they face the Columbus Blue Jackets in the National Hockey League playoffs.  Led by Sidney Crosby, the Penguins were one of the top offensive teams in the league this season.  Crosby racked up an NHL-best 104 points in 80 games to win the scoring title (nobody else even reached 90 points) and reached 100-plus points for the fifth time in his career.  Crosby led the league in assists (68) and points while finishing third in faceoff wins.

Despite losing Pascal Dupuis to a season-ending injury, Evgeni Malkin missing 22 games andKris Letang missing 10 weeks due to a stroke, the Penguins were still among league leaders in goals scored.  Malkin notched 72 points in only 60 games, but may be unavailable for the start of the series.  After Letang suffered a stroke, there were fears as to whether or not he would ever play again.  Fortunately for Letang, he played the final games of the regular season without incident.

Although Malkin may be unavailable for the start of the series, the Penguins still possess plenty of firepower up front.  Chris Kunitz scored 35 goals and 68 points in 78 games this season. James Neal scored 27 goals and 61 points in 59 games and Jussi Jokinen scored 21 goals and 57 points in 81 games.  During Malkin’s absence, Brandon Sutter showed the ability to chip in offensively.  Letang – 22 points – was limited to 37 games this season, but Matt Niskanenpicked up the slack offensively, posting 10 goals and 46 points in 81 games.  A healthy Letang will only add to the Penguins’ great firepower.

Marc-Andre Fleury went 39-18-5 with a 2.37 GAA, .915 SV% and five shutouts this season.  This is the fourth consecutive season in which he posted a sub-2.40 GAA.  Fleury is one of the best goaltenders in the NHL when he is on top of his game.  However, he suffered through postseason struggles in recent years.  If the Penguins are to make a deep run, Fleury will have to be sharp.

Blue Jackets fans had to be thrilled to finally witness the breakout year of Ryan Johansen.  He led the team in goals (33) and points (63) in 82 games.  Johansen is an excellent puck handler who is unafraid to drive to the net and he possesses a good shot.  This long-awaited breakout may be just the beginning.  In terms of talent, the Blue Jackets simply do not match up with the Penguins; however, if they are able to limit the production of the Crosby line and get an excellent performance from Johansen, they may have a chance.

Defenseman James Wisniewski had another strong season for the Jackets, scoring 51 points in 75 games.  Johansen and Wisniewski were the only Blue Jackets to post 50-plus points.  Brandon Dubinsky and Cam Atkinson were the only others to reach 40-plus.  Sergei Bobrovsky went 32-20-5 this season with a 2.38 GAA, .923 SV% and five shutouts.  Bobrovsky has been nothing short of spectacular in his time with the Blue Jackets, and he must continue to play that well for his team to have any chance to upset the Penguins.

General expectations for this series favor a victory by the Penguins.  The reality is that the Blue Jackets do not possess the collective star power the Penguins have up front.  This will likely be a very short series, unless the Blue Jackets can grind out 1-0 or 2-1 victories.  The Blue Jackets will not be scoring four or five goals in a game unless Fleury struggles as he has in recent years.